All Collections
Prospects and Organizations
Import and Export
Import

Upload your prospects, organizations, and deals

You can easily import your prospects, organizations, and deals into your Prospect.io account.

Maximum size: 10MB. If your file is larger than 10MB, we recommend splitting it into multiple smaller files. You can use a tool like filesplit.org

How to start an import

Navigate to the Prospects, Organizations, or Deals page and click the Import button.

You can also start the import from the Settings > Imports page by clicking the New Import button.

Then drop the file or select it from your computer. 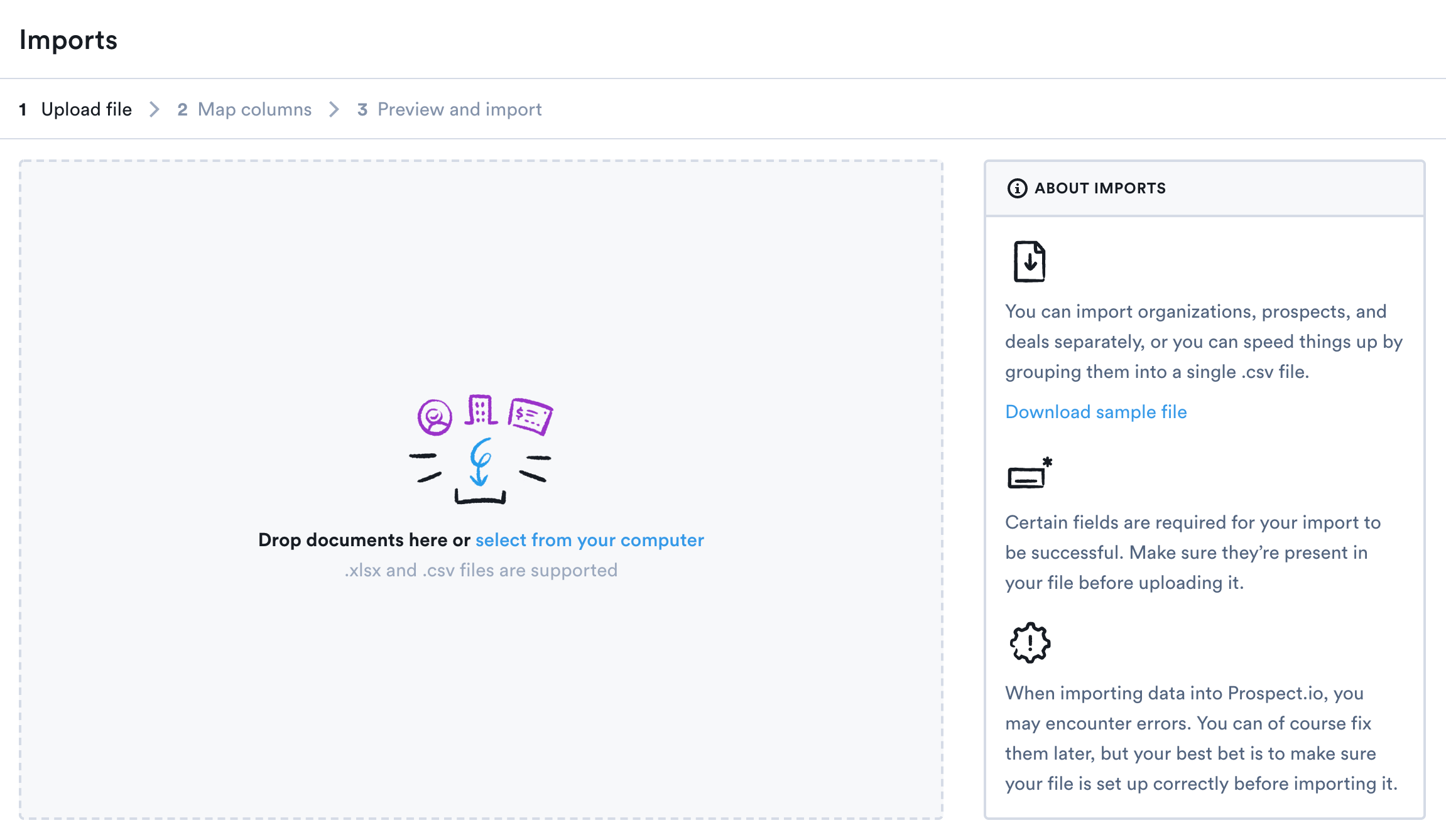 In the mapping section, select a field for each column of your file.

Columns that are not matched to any field will not be imported.

Some fields are required to import the data from your file. Make sure you have them in the file and map them to the corresponding fields in Prospect.io.

The column with emails needs to be mapped to the Email (prospect) field.

The column with organizations' names should be mapped to the Name (organization) field. Without it, the organizations won't be imported from your file.

The columns with deals' names and deals' stages need to be mapped to the Title (deal) and Pipeline & Stage (deal) fields respectively. Without them, the deals won't be imported from your file.

During the import, you can select the lists to which you want to upload your new prospects or organizations.

For that, you need to have the lists column in your file with the list name(s) in it. Map this column's values (lists names) to the corresponding Lists field (prospects lists or organizations lists) in Prospect.io.

Map the Lists field (prospects lists or organizations lists) to the corresponding column from your file.

Click on the Lists to map the list names from the file to the corresponding lists in Prospect.io.

2. Select the lists in the Configuration step

If you didn't map the lists in the Field Mapping step, you can simply select the needed lists for the prospects and/or organizations from the drop-down menu in the Configuration (third) step of the import.

You can choose to skip the prospects or organizations that are already present in your account or update all the fields that have been mapped.

If a field is empty in your import file but has a value in Prospect.io, we won’t update it to blank but will keep the existing data.

This option allows you to verify the validity of the imported email addresses. Each verification – whatever the result – costs 1 credit. Learn more about credits.

Note: if you want to find emails instead, learn how to use the Email Finder.