The Different Statuses of a Prospect in a Campaign

A prospect can be in or out of a campaign.

When a prospects is in a campaign and the campaign is running, it means they're going through the steps of that campaign. 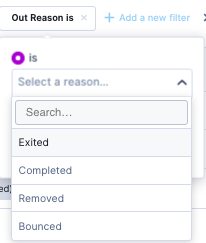 Prospects for whom the campaign was stopped because they performed an action that triggered an exit.

Examples: they replied, clicked on a link, have been qualified or have been converted.

The prospect's for whom the email bounced. When that happens, our system will automatically remove the prospect from the campaign.