All Collections
Campaigns & Emails
Common issues
Emails Are Not Being Sent

Emails Are Not Being Sent

There can be a few reasons why your emails are being sent after adding prospects to a campaign:

After adding prospects to a campaign, it can take up to 15 minutes for the first email to be sent. This is the time required for our servers to process your email.

In some cases, it may take a bit longer, for example when our servers are being heavily solicited.

As a rule of thumb, the first step of a campaign shouldn't take more than 45 minutes to send after the Start now button has been clicked.

Your campaign is Off

If you campaign status if Off, emails will not be sent. To check the status of a campaign, look under the Status column on the campaigns screen: 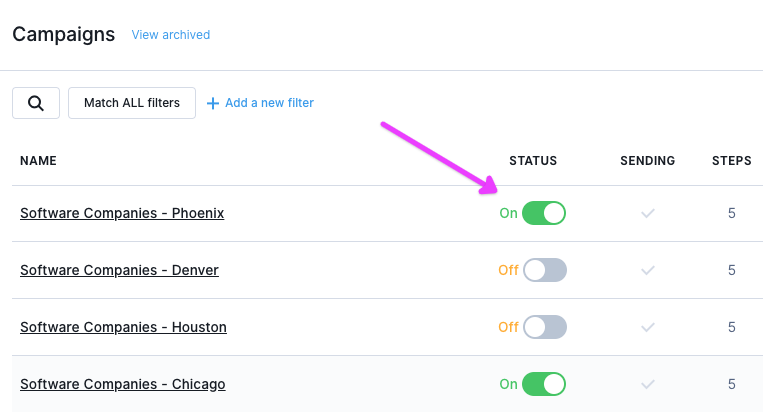 Your sending address is in error

After adding prospects to a campaign, we'll start sending emails with the selected sending address. If there is an issue with this sending address–for example, if you changed your Google password–then the campaign status will automatically switch to Off.

To restart the campaign, you'll have to reconnect your sending address.

Note: You'll get a notification email when a sending address is in error.

You scheduled the campaign for later

When adding prospects to a campaign you can choose to send the first step of the campaign later. If you do that then emails are not going to be sent right away.

You reached the daily sending limit of your sending address

To protect your email account, every sending address has a daily limit. If you reach the limit, your emails will automatically be scheduled for later.

We automatically put a 30-second delay between each email sent using a sending address. This is a security measure to avoid your account being marked as spam.

If you scheduled a lot of emails on a given day, the last ones in the queue might be sent after a few hours because of the delay between emails.

Sometimes the email server (Google, Outlook, your SMTP server) can be temporarily in error. When that happens, we'll retry sending your email until the server successfully replies. This can add delay to sending your emails.